Reflection based on lesson 8: Working with Graphic Novels or Novels for Teenage Readers on the 23rd of March 2018. This reflection will focus on the pair-work of the graphic novel Habibi by Craig Thompson (2011): https://drive.google.com/open?id=1_U9l9TgiGBvq6pDcAELjkd2yqa_KdKey

During this lesson, I looked at the beautiful graphic novel Habibi with Emil Alexander. The book itself touches upon very heavy subjects both in writing (the story itself), but certainly also from the pictures, which add severity to the meaning regarding e.g., rape and violence. This book will not be suitable for all students and probably only 9th-grade students. Besides this initial disclaimer, I would like to point out 2 main reasons for using this kind of literature in the classroom:

This reflection is based on the reading of The Red Line by Charlie Higson (origin; 1993, pub. René Bühlmann, 1995) and is different than my previous reflections in as much as I am proposing the usage of the short story in intercultural citizenship education as a part of English teaching.

Wikipedia: Red line, or “to cross the red line“, is a phrase used worldwide to mean a figurative point of no return or line in the sand, or “a limit past which safety can no longer be guaranteed.

The short story has a 3rd person narrator and happens in the tube of London – On the red line. The chapters of the short story are named of and in the same order of the stops of the tube. Following is a brief recap of the chapters:

Chapter: Oval
We find out, that the story takes place in London. We are in the head of an unnamed man. This 1st, an unnamed character is introduced and described as; male, white, pale, hairless (routine), perfectionistic, loves karaoke, infatuated w. Bob Seger, and hates change. We meet him in a situation, where his world has fallen apart as he finds, that the (/his) karaoke machine has been removed.

Chapter: Embankment
Now we are at the actual tube. The 2nd character introduced – we are now in his head; Berto – He is new in London visiting Cathy, from Venice — met Cathy there. Even though they are not on the tube, the 3rd & 4th characters are introduced; Cathy — English, in an open relationship, Cathy’s boyfriend; Talks a lot, friendly. Berto is confused about his relationship with Cathy and her relationship with her boyfriend. Upsets Cathy for an unknown reason and she leaves him alone on the tube in London.

Chapter: Leicester Square
Flashback to a situation where the unnamed guy tries to find a new karaoke place to sing Bob Seger at, he fails. We find out he is disgusted by people, as they are all ugly and hairy.

Chapter: Goodge Street
Berto is trying not to panic at the tube — tries to gather the courage to ask anyone for help, is scared no-one will understand him. Is scared to be laughed at. He is considering the fellow-tube-riders; “Old people are all deaf, the middle-aged man is half asleep and must be a drunk, he wants to ask a sympathetic person, a young woman, she is probably nice.”

Chapter: Euston
Now the 5th character; Denise (the young woman on the train) — she is both paranoid and scared. She is interpreting Berto as; dark-skinned, dark eyes, looks a bit like a model, but like all men a potential rapist. A 6th character is briefly introduced; Neil (Denise’s boyfriend) — thinks Denise should relax. The unnamed guy is described by Denise as having curly blond hair. Denise feels like the unnamed guy and Barto are staring at her in the tube and she is very uncomfortable.

Chapter: Tufnell Park
The unnamed guy feels stared at by both Denise (snotty girl) and Barto (greasy monkey) and is getting really worked-up in his own head about some tape, that he hopes is strong enough…

Chapter: Archway
Barto is listening to his cassette with an Italian voice trying to teach him English.

Chapter: Highgate
Barto has finally gathered the courage to ask Denise for help, but she sees him approaching as a nightmare (almost) coming true. She rushes out of the train (one stop too early) and up the stairs just to find that ‘the man’ (Barto) didn’t follow her. She is frozen by fear and starts crying.

Chapter: East Finchley
As Barto passes the unnamed man in the tube, regretting he didn’t follow Cathy or got to ask Denise for help before she got off, he walks in the opposite direction of the train. The unnamed man stabs Barto with a kitchen knife wrapped around his wrist with tape. Before Barto realises what is happening, he is left to die on the floor of the train, and whilst watching his own blood forming a red line, he suddenly remembers how he could’ve found his way back home to Cathy’s place. 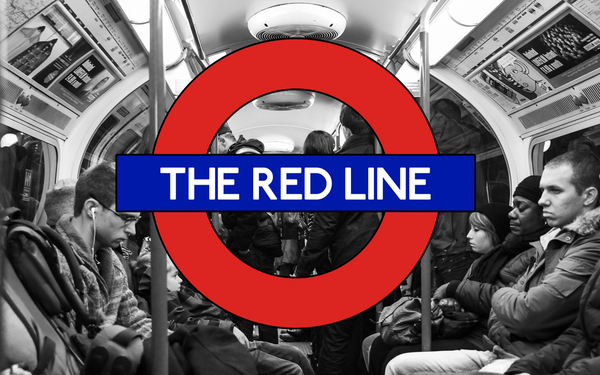 The short story was in 2014 published as a short movie of just 19 minutes:

I haven’t been able to get a hold of the full 19-minute version of the movie, but I think a combination of first the short story, then watching the movie, would enable students’ awareness of prejudices. The story itself is written in an easily understandable English, and with a little help from a glossary list and/or repetition of the new vocabulary, I think the students would find it easy to identify the actions, different persons and perspectives within the story as listed above chapter per chapter. Thus after discussing the story thoroughly, the students have created images in their heads of both the characters and their situations, most likely many of them can identify with the fears of the characters – I think no one can say that they have never been there; on a train, judging someone or feeling irrational fear. These discussions are important, especially if we want the students to be able to reflect on their own behaviors and attitudes, past and future. And the end goal would be for the students to receive some sort of critical political awareness, for example combining this module with The Red Line, with continuing to discussing how the media (incl. the Red Line film) affects our perceptions of certain groups of people.